Polo - a mint, a game or a miniature battle?

Warlike tribesmen in their cavalry units played a training game, with as many as 100 to a side it was like having a miniature battle. As early as the 6th century BC in Persia the King’s Guard or other elite troops, used these training sessions to develop their battle skills. 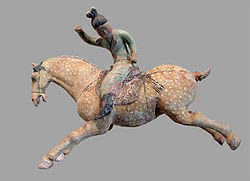 In time polo became the national sport in Persia played extensively by the nobility. Women as well as men played the game, as indicated by references to the Queen and her ladies engaging King Khosrow II Parviz and his courtiers in the 6th century AD. Persian literature and art detail these rich accounts of polo in antiquity.

The game spread eastwards from Persia to other parts of Asia, the Indian subcontinent and China, where it was very popular during the Tang Dynasty (618AD – 907AD) and frequently depicted in paintings and statues.

This Game of Kings, as it became known, proved invaluable for training cavalry and by the Middle Ages the game was being played from Constantinople to Japan. The name ‘polo’ is said to have derived from the Tibetan word “pulu” meaning ball. 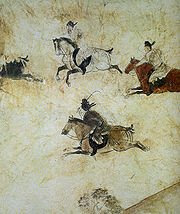 The modern game of polo, though formalised and popularised by the British, is derived from its Persian roots and the Indian state of Manipur, in the far east of India bordering on Myanmar (Burma), where ‘Pulu’ is played – an indigenous game similar to the now more familiar polo.

In the latter half of the1800s the British took up the game of polo during the colonisation of the Indian subcontinent and the trading opportunities that arose with this expansion. The first polo clubs, using the anglicised version of the game, were established in Assam and Calcutta in the mid 1800s.

The game the British developed was slow and methodical and lacked the aggressive methods and equestrian skills required for the training of the cavalry units; however, as polo spread from Europe and the Middle East, it found popularity in Argentina, Brazil, Chile, Mexico, Pakistan and the United States (a girls' team shown).

James Gordon Bennett, the publisher of the New York Herald, founded by his father, organised the first polo match in the US at Dickel’s Riding Academy at 39th Street and Fifth Avenue. The Americans upped the tempo and polo once again became a high-speed sport. 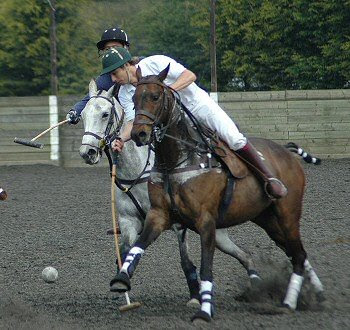 Polo in the 21st century has been given a new twist as Arena Polo, which is played in a smaller enclosed space approximately 100 yards x 50 yards (90 m x 45m) – whereas the polo field’s grass area measures 300 yards x 160 yards – approximately the area of nine American football fields. Other than being three a side, rather than four, and using a different size ball, the ponies and equipment are the same as conventional polo.

Arena Polo is a more affordable option and can be played on arenas already used by other equestrian events. The London international charity championship being played today and tomorrow, for the first time at the Horse Guards Parade, which was just recently the setting for the Trooping of the Colour, will offer visitors a wonderful gladiatorial spectacle. 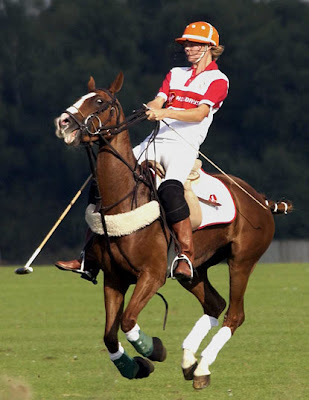 The parade ground has been covered with a temporary surface of fibres, sand and wax to form a track five inches thick. Ticket holders can watch the grooms prepare the ponies, then see the speed, dexterity and aggression of pony and rider at close quarters during the game itself.

For some lucky ticket holders Fortnum and Mason’s will be hosting a ‘Champagne Afternoon Tea and Canapes’ in the main marquee, while the 1707 Bar (that iconic shop’s founding date) will be serving champagne, wine, beer and soft drinks, is open and available to all; there is also a superior Ice Cream Parlour .. and it looks as though the weather might be suitable for a cooling ice.

The peppermint flavoured polo, with the hole in the middle, was first manufactured in the UK after the War in 1948. The mint polo may well be used by the Polo players of the world to provide a cool and fresh feeling after their hard fought matches – who knows?!

As an addendum, this is where the London 2012 Summer Olympics beach volleyball competition will be held – so finally Horse Guards Parade looks set to be used more often for appropriate sports matches, where an arena is required and where temporary seating stands of 12,000 and 5,000 can be erected.

Thank you Mr Postman for bringing us this news - yes thank you .. I'm back safely; but it was good to meet up with some cousins and stay overnight with great friends, and my goddaughter, from our time in South Africa .. my mother will laugh on hearing all the stories and she'll be interested in the history of the game of Polo - though none of us ride.

Your topics are so delightful. I wonder if a polo poney inspired you during a dream for this?

Hi Liara .. regret not - wish he had though!

Just a subject I'd had in mind to write about, and when I saw the inaugural tournament being played tonight and tomorrow on Horse Guards Parade - decided now was the time to write it!!

Thanks for enjoying the posts ..

I learn so much from your posts. I've seen polo being played before, without even wondering about the game's history. Now I can reel off some facts and sound really knowledgeable next time I'm at the polo club with friends. Yay! ;)

Quite fascinating history of polo! It is amazing that so many developements came out of Persia during that period.

Hi Daphne .. thanks for coming over. I thought you might have seen polo being played .. like most things we just do - without being aware of its history. Glad you'll be able to reel of some facts and chat about polo in a different light with your friends.

Hi Pete - thanks for enjoying the history of polo. Yes - I was thinking how much has come out of Persia .. I'll have to have a look into it.

Hilary, thank you for the history of Polo. Nice job on your post.
Dan and Deanna "Marketing Unscrambled"

Hi Deanna and Dan ..thanks for visiting and for enjoying the post.

You amazing me everyday with your story and lessons here. I never knew so much about Polo before. I would love to try to play a game one day.
Thanks for sharing.
Giovanna Garcia
Imperfect Action is better than NO Action

Hilary, you find the best photos. They are always just what is needed. They add to your posts.
Dan and Deanna "Marketing Unscrambled"

Hi Gio .. thanks for being 'amaze' - I just enjoy these sorts of stories, as does my mother .. still!

I thought of you and thought you'd love to have a go at a game .. it looks fun - I must go to a match sometime to watch.

Hi Deanna and Dan - thanks for enjoying the photos .. yes I agree they give an immediate flavour to the post and will be useful to have in the future .. when I branch out with a book, newsletter etc ..