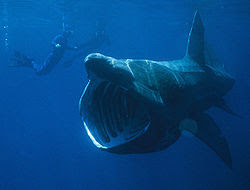 At this time of year just down the coast from the Minack Theatre towards Lands End sightings of Basking Sharks take place and Penzance readies itself for hardy shark watchers taking to the still cold waters off the Cornish coast. The Gwennap headland and cove offer a sighting point before these seven ton giants disperse up the western coasts of Britain.

Upwellings, tidal columns, of plankton rich nutrients, brought to the surface as ocean tidal slicks, are the draw for these huge mammals to converge in our waters; it’s thought they’ve migrated to breed and stay in the area until September when the mass migration reverses southwards once again.

The cavernous jaws belie their gentleness as giant filters, percolating an estimated Olympic size pool of phyto enriched water every hour! The birds feeding on the fish indicate the arrival of the nutrient tidal front, as the dorsal fins are spotted cruising through the surface water soon after. The Basking Sharks take shelter less than 50 metres from the shore when the stormy tides dictate.

The arrival of the Basking Sharks chasing their food chain indicates the arrival of other tropical animals – Ocean Sun Fish, Whales, including killer whales (Orcas), Dolphins, Porpoises, Seals and rare jelly fish .. for summer sightings off our Cornish coast.

Twenty years ago my mother and I had fantastic trip to the Skeleton Coast in Namibia going right up to Cape Fria in the north, camping on the beach, then on to the Kunene river – which is the Angolan border. It’s not called the Skeleton Coast for ‘nothing’ .. but that’s for another day.

The Namib Desert is different .. the heat inland is intense, while the strip along the coast is positively freezing when the coastal fog rolls in. The arctic cold Benguela current coming up the western coast of Africa heats the land/ocean air forming this life giving fog for insects and plants on land, while bringing its own upwelling of rich nutrients together with shoals of pilchards and sardines.
This established pattern of food and water chains revolves around the all-important fog moisture generated by the Benguela upwelling, together with the organic detritus gathered by the winds and dispersed along the strand, up onto the dunes and inland through the ephemeral river valleys. The grey-green foam spatters along the beach providing a constant source of nourishment for the primary dune dwellers who, in turn, are themselves preyed upon .. keeping the cycle of life going.
Two years ago or so a cousin from Vancouver Island sent us sent some pictures entitled Cappuccino Beach or Yamba foam and when I delved deeper I established that this phenomenon had apparently not occurred for 30 years. Two years on ..it seems that it’s become a regular occurrence off the coast of Yamba, New South Wales. 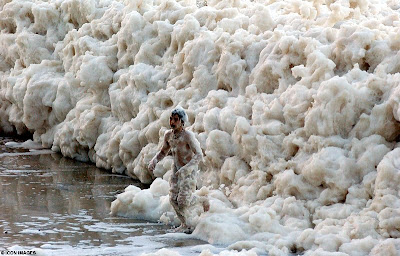 Some kids braved the foam and others rode the waves under the foam ... possibly not the most sensible thing to do – but they survived! However the pictures are wonderful.
Scientists explain that the foam is created by impurities in the ocean, such as salts, chemicals, dead plants, decomposed fish and excretions from seaweed. All are churned up together by powerful currents which cause the water to form bubbles.

These bubbles stick to each other as they are carried below the surface by the current towards the shore. As a wave starts to form on the surface, the motion of the water causes the bubbles to swirl upwards and, massed together, they become foam. 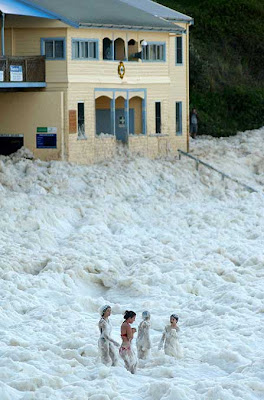 The foam baskers all benefit from the churning of the seas .. the basking sharks filtering unimagineable amounts of ocean water off Gwennap, the sea life, insect life and predator life surviving off and benefiting from the Skeleton Coast’s foamy waves, while no doubt similar benefits occur off Yamba, with the kids too having enormous fun on the foamy beach immersed in waist high ‘cappuccino’!

Hilary, the wonders of this world. You come up with the most interesting ones. It is nice to come here to learn new things. Thank you for adding to our knowledge.
Dan and Deanna "Marketing Unscramble"

Hi Deanna and Dan .. thanks so much - I appreciate your comments ..and glad you enjoy the variety of topics ..

Your information on the Yamba foam was really quite interesting! At first glance it appears to be suds from waste water, but this is is a natural phenomenon.

Hi Pete .. Yamba foam looks disgusting I agree - and these tidal upwellings are so important to Ocean and sea life ..