A place of sun worship, a healing sanctuary, a sacred burial site, or something different altogether? 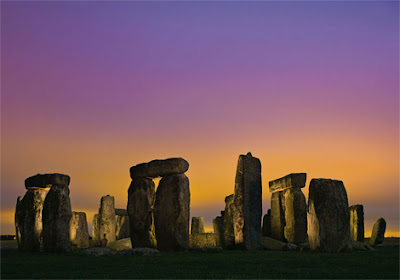 Mystery surrounds this 5,000 year old monument - Stonehenge is a powerful reminder of the once-great peoples of the late Stone and Bronze Ages. Erected between 3,000 BC and 1,600 BC, a number of the stones were carried hundreds of miles over land and sea, while antlers and bones were used to dig the pits that hold the stones.

The surrounding landscape is also fascinating. It contains huge prehistoric monuments, stretching over several kilometres, massive earthwork enclosures, and hundreds of burial mounds. The whole World Heritage Site covers more than 2,600 hectares and includes 415 archaeological sites protected by scheduling, with Stonehenge sitting at the centre of this densest complex of Neolithic and Bronze Age monuments in England.
The name derives from Old English ‘stan’ for stone and ‘hengen’ in reference to something hung up, in this case the horizontal lintel stones and consists of an outer circle of local sarsen stones, and two inner circles of Blue Stones. From the centre of Stonehenge the Mid Summer Solstice Sun rises over the Hele Stone (helios for sun), which stands in isolation outside the circles.

Of the more than nine hundred stone rings existing in the British Isles, Stonehenge is the most well known. The megalithic monuments of Britain and Europe predate those of the eastern Mediterranean, Egyptian, Mycenaean and Greek cultures. The Druids however had nothing to do with the construction of the stone rings, they are a priestly and learned class and are known to have conducted their ritual activities mostly in sacred forest groves.

Sarsen stones (left) are the remnants of a hard dense cap of sandstone – these blocks ‘moved’ in a downslope “flow” across the landscape, through the process of ‘solifluction’, which occurred in areas of periglacial environment. These huge stones up to eighteen feet in length and up to twenty five tons in weight are found in the old Saxon area of Wessex (SW England), especially around the Stonehenge area.

The term "Bluestone" in Britain is used in a loose sense to cover all of the "foreign" stones at Stonehenge. It is a "convenience" label rather than a geological term, since at least 20 different rock types are represented. The bluestones at Stonehenge were placed there during the third phase of construction around 2300 BC. The stones weigh between 2 and 4 tons each.

The majority of them are believed to have been brought from the Preseli Hills (below), about 250 miles away in Wales, either through glaciation (glacial erratic theory) or through humans organizing their transportation. If a glacier transported the stones, then it must have been the Irish Sea Glacier. Recently the archaeological find of the Boscombe Bowmen nearby has been cited in support of the human transport theory, while new glacier modelling supports the erratic theory. 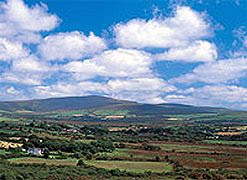 Unlike the stones of the main monument the Hele Stone is unworked, the top of the stone is naturally pointed. It’s a huge stone measuring around 20 feet long, of which 4 feet are buried, 8 feet wide,7 feet thick and weighs around 35 tons!

Stonehenge was mentioned by Geoffrey of Monmouth (1100 – 1155) in his (Historia Regum Britanniae), when Uther Pendragon (a legendary king and father of King Arthur) is said to have spent time there. His “Histories of the Kings of Briton” appears to be a mix and match account incorporating others’ histories (eg the Venerable Bede) of both fact and fiction.

The circle was aligned with the midsummer sunrise, the midwinter sunset, and the most southerly rising and northerly setting of the moon. The ground plan and structural engineering of Stonehenge incorporate sophisticated mathematical and geometrical understandings on the part of its builders.

Modern techniques in archaeology, and the series of recent digs, have helped to shape new theories about the stones, but their ultimate purpose remains a fascinating and enduring mystery.

Stonehenge was simultaneously used for both astronomical observation and ritual function. By gathering data regarding the movement of celestial bodies, the Stonehenge observations were used to indicate appropriate periods in the annual ritual cycle. During those periods, among them being the solstices, equinoxes and different lunar days, festivals and ceremonies were held.

Archaeoastronomy is the belief that early peoples, in even a primitive state of intellectual advancement, took notice of the sky and its changes. Stonehenge is a true attestment to early astronomy and its accomplishments. In 1740 William Stukeley, (doctor and antiquarian) was probably the first to apply archaeoastronomical ideas to Stonehenge. 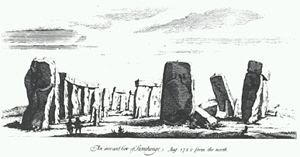 Stonehenge stands as a lasting testimony to the people who built it, in several phases between 3,000 and 1,600 BC: amazing feat of engineering and arguably the most sophisticated stone circle in the world.
An inward view of Stonehenge from August, 1722 (William Stukeley)
Last night 35,000 gathered to herald the dawn of the 2009 summer solstice, when the sun reaches its extreme northern point in the ecliptic and appears to stand still (Latin ‘sol’ = sun; ‘sistit’ = stands) before it turns back on its apparent course, the track in the heavens along which the sun appears to perform its annual march.
Dear Mr Postman .. have you been to Stonehenge? We used to go quite often as it was on our route, before the roads were improved, on our journey from Surrey to Cornwall - it was a good stopping off point and place as kids we could run around.
Hilary Melton-Butcher
Positive Letters
Posted by Hilary Melton-Butcher at 17:05

As always this is a really great and informative post. Thank you for sharing your insights!

Hi Dani .. many thanks - you're a star visiting and appreciating the stories!

Hilary, This is great to learn more on these old places. They are very interesting. Thank you for always teaching us something new.
Dan and Deanna "Marketing Unscrambled"

Hi Deanna and Dan .. thanks for visiting .. and glad you learnt something new -

Thanks for your informative post on Stonehenge! It has always been a mysterious place with a number of theories as to how it was built and why!

Hi Pete .. yes Stonehenge seems to give us mystery - perhaps it's a place you'll visit when you come over at some stage ..

They keep looking for clues and I guess today's technology will offer some new ideas as to why it was built ..

Hilary, that is a day that we will be watching. To learn more about it that would be great. Have a good day.
Dan and Deanna "Marketing Unscrambled"

Hi Deanna and Dan ..thanks for coming back .. and am glad you liked the post. Mid-Summer's Day is special ..and it's now so sunny = it is lovely .. long may it last!

Yes, I have always wanted to visit Stonehenge! When I visit England...it would be good to tour the site.

Your blog post was quite informative! Thanks for the super information!

Loved reading about Stonehenge, because I visited it once and at the time had little idea of its history and meaning.

Glad you enjoyed it so much - thanks for being here ...
Hilary Melton-Butcher
Positive Letters

Hi Daphne .. glad you liked remembering your visit to Stonehenge - it is an iconic place to visit .. and I too liked finding out about it again!!