Plants as metal gatherers - who'd have thought it? 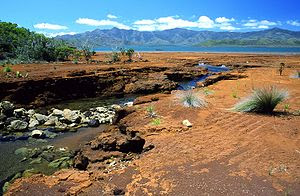 Having lived in South Africa for a while amongst the Johannesburg mine dumps, which were barren arsenic-riven, grooved huge mounds of red soil, with little growth in or around them .. I was really interested in reading more about these metal gatherers and reclamation plants – making an impact on lives around the world.

A creek in southern New Caledonia. Red colours reveal the richness of the ground in iron oxides and nickel.

I’ve written about the Eden Project before and how my mother and I have always enjoyed our visits, but more importantly we admire the Project’s concept of spreading the word on, amongst other things, reclamation ... just about everything within the site is reused, or reclaimed – they even made their own soil from the china clay pit spoils.

Having seen the barren dumps in South Africa, which in the late 1980s and early 1990s were flattened as they were reworked using improved technology extracting more gold from the spoil heaps, but leaving a bare landscape where the winds would blow the dust all over the place. I used to work in a new large retail store’s head office and we were dwarfed by the mine dumps around us .. but then suddenly the landscape changed and the building took on its own space on the landscape, relatively unnoticed before.

So having seen some dried up vegetation grasses and not much else on these dumps I was very interested to find out more about these metal grabbing plants. Any mine workings are likely to have very high residual concentrations of potentially toxic heavy metals such as copper, zinc, lead and cadmium and metalloids like arsenic, as well as having very low nutrient and organic matter content and they can be very acidic.
Painting of Bissoe Sulphuric Acid Works, Carnon Valley, Cornwall late 19th Century by Lamorna Birch
As an aside I didn’t know that arsenic occurred in the Periodic Table! .. now I know: apparently the Periodic Table contains metals and non metals .. and interlinking these are the metalloids, with their intermediate properties. For example – aluminium = metal; Silicon = metalloid; Phosphorous = non-metal. 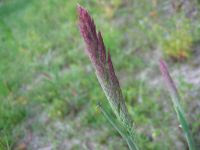 The very harsh mine environment is the home of plants referred to as ‘metallophytes’, plants which have evolved metal tolerances and other adaptations. Charles Darwin, if he’d still been alive, would have been extremely interested in the evolutionary adaptation in plant populations.
Thrift below, Yorkshire fog grass to the right 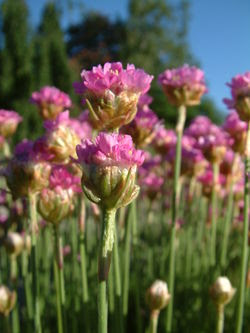 In Cornwall some of the pasture grasses and certain plants have developed locally adapted populations tolerant to copper, lead and zinc – such as thrift, sea campion and the wonderfully named Yorkshire fog grass. In the Pennine ore fields running along the spine of England, where the rock is limestone and many of the old mines date back to Roman times, the vegetation has evolved and is much richer and can provide a continuous turf.

These metallophytes have particularly attracted renewed interest since the end of the War, but were known as indicator plants providing a powerful tool for mineral exploration .. the ‘copper flowers’ discovered in the Congo enabled early mineral prospectors to locate many of the major copper/cobalt mineral deposits in central Africa.

The pioneering work of the late Professor Tony Bradshaw, who collaborated with the Eden Project, has been central to mine-site rehabilitation and ecological restoration of the toxic wastes, thus enabling a sustainable plant cover to be established.

Plants adapt and evolve in ways we wouldn’t expect – some even restricting the uptake of toxic metals to their roots .. thereby limiting the potential impact on grazing animals and food chain transfers.
Alpine Pennycress - white
The Blue Sap of the Sebertia Acuminate

Some plants are not only highly metal-tolerant, but also exhibit metal uptake through the whole plant – these are known as hyperaccumulators. The most impressive of these is the Sebertia Acuminate, known locally as ‘Blue Sap’ of New Caledonia (Serpentine rich islands off north east Australia), as it bleeds, when slashed, a bright blue latex containing up to 25% nickel. 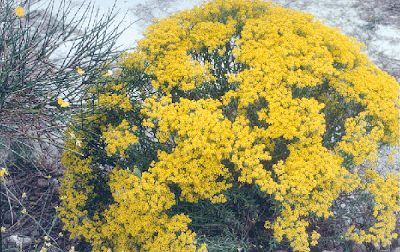 Alpine Pennycress (Thlaspi Caerulescens) in the UK has been used as a cropping plant, as it absorbs zinc and cadmium from the contaminated soils. While it's also found in the States - in Colorado, Wyoming and Montana. Alyssum as a genus has been used for years, but now forms the basis for a breeding programme for commercial nickel phyto-mining. Yellow Alyssum Murale has been used similarly on the barren serpentine soils of Oregon and northern California in the US. The dried plant material is then ashed which produces a high mineral content (upwards of 20%) – higher than any mineral source of the metal! 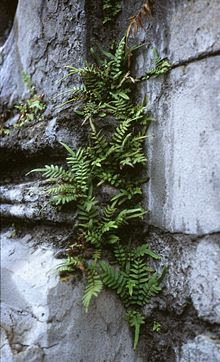 The Chinese Brake Fern similarly can be used for hyperaccumulating arsenic from soils and waste waters .. and is already being used commercially in its native China as well as the USA.

These plants with their unique gathering properties will continue to be studied and developed to enable us to clean up our environment by extracting valuable metal resources, with the least damage to a landscape already scarred by mineral extraction.

Today we need to do all we can to keep our world clean and safer – yet the world, unbeknownst to me, was already starting to do it on our behalf. It is extraordinary and wonderful this world of ours... – we just need a gold plant hyperaccumulator now!

Thank you Mr Postman for delivering this letter – my mother with her Cornish affiliations to the mining history will be really interested .. and we can discuss her visits to South Africa. She was cheerful today, but didn't want a story - however it's lovely seeing her happy ....
With thanks to Professor Alan Barker and the Eden Project 2009 spring publication for their informative article on this subject, which so inspired me.
Hilary Melton-Butcher
Positive Letters
Posted by Hilary Melton-Butcher at 15:33

Wow! This is really interesting! Thanks for writing about it.

Hi Dani .. thanks for visiting and for being so interested in these metal gathering plants .. I too was amazed.

Agree. Very interesting-- as in nice. :) Thank you for sharing this post.

You always have a way of bring interesting stories and facts to us. I really enjoy that.
I would have never know about "Metal Gathering Plants."
Thanks for sharing.
Giovanna Garcia
Imperfect Action is better than No Action

Hi Hydroponic Garden .. thanks for visiting and I'm pleased you enjoyed the information.

Thanks for visiting .. good to see you here ..
Hilary Melton-Butcher
Positive Letters

Hi Gio .. thanks for visiting .. so pleased to see you here and learning something new .. I was really interested to read about them ..

Thanks you - Hilary Melton-Butcher
Positive Letters

What a fascinating post on plants that extract minerals from the soil! It is interesting that they could possibly use plants to harvest and process minerals rather than mine them!

The use of plants for extracting dangerous heavy metals is also a great idea! Various areas of world have been contaminating by mining...it would be an excellent and probably cost effective way to cleanse contaminated areas.

Thank you for your entertaining and informative post today!

Reading your blog makes me feel so clever! I learn so many new things and your way of writing about potential dry subjects somehow bring them to life. I think it's your personal enthusiasm that spills over in the writing and hence the reading.

You're doing great work here. My regards to your Ma - hope she enjoyed hearing about the metallo-whats?! ;)

Hi Pete .. thanks for taking note - I too was surprised and very interested .. particularly having seen the barren mounds of mining areas.

The natural disinfectant use of the plants over the years .. when everyone thought the land was dangerous .. has to be a great research area.

Hi Daphne .. I'm extremely glad I'm making dry, dull subjects a little more jewel like .. and for you am able to bring them alive .. they interest me & I'm amazed at what the world can still show us.

Thanks so much for your support .. yes I do send love from around the world to her - she's pleased to hear about friends ..

I second all the great comments above. I'm so impressed by how deeply you get into such a wide variety of subjects. I'm so much more educated from reading your blog.

The world is an amazing and complex place. If we can just learn to follow it's integrating example instead of trying to conquer it . . .

Thanks for your insights.

Hi Carla .. thank you so much - I appreciate your comments .. and am glad you're enjoying the varied subjects.

As you say the world is a complex place and definitely much wiser than us humble mortals!

Good to see you again .. and the days disappear as you post - but we build a wealth of knowledge for each other ..

Hi Hilary,
This really is pretty amazing, I think! Wow, plants that gather up the metal - very cool! This is all new to me, and so interesting. Thanks so much for sharing this.

Hi Lance .. thanks for coming over - plants evolving over the millenia and now apparently decades could be really useful.

Glad you enjoyed it - great to see you here ...
Hilary Melton-Butcher
Positive Letters

Hilary, thank you for the great amount of knowledge that you impart to us. This world of ours is great in and of it's self. Look at the way it cleans up after it's self.
Dan and Deanna "Marketing Unscrambled"

Hi Deanna and Dan - thank you! Just glad it's enjoyed .. our world is great .. and lots interests me.

I never knew about plats that can absorb metal, this is a very informative article.

Nature has its way of cleaning herself, if we could just help a bit, we could be living in a paradise-like state...wishful thinking:)

Hi RS .. great to see you .. and you’re right I hadn’t realised until last year that plants can absorb metals .. and are being used in clean up operations .. mine dumps etc .. and now at Chernobyl – the beautiful sunflower.

Again – if we could just help Mother Earth a little, we’d all be living in a healthier cleaner world .. and in due time living in a paradise state – but that is very forward thinking!

Really good to see you .. have a lovely day .. Hilary

PS I’m answering your comment – it’s got lost in the web workings somewhere since I hit the publish button – it will appear sometime .. I hope & think!