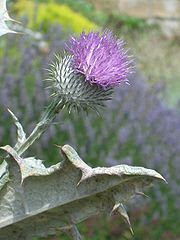 Do you know what these are? They are the national plant emblems British Isles. The thistle of Scotland, the leek of Wales, the Rose of England and the Shamrock of Ireland are the national symbols, which may appear on many things such as the national flag, coat of arms, or other patriotic materials.

According to legend the Vikings were successful at the start of their war against the native inhabitants of Scotland and were likely to be overrun. A Viking is one of the Norse (Scandinavian) explorers, warriors, merchants and pirates who raided and colonized wide areas of Europe from the late eighth to the early eleventh century.

These Norsemen used their famed longships to travel as far east as Constantinople and the Volga River in Russia, and as far west as Iceland, Greenland and Newfoundland. This period of Viking expansion is known as the Viking Age, and forms a major part of the medieval history of Scandinavia, the British Isles and Europe in general.

The adoption of the Scottish Thistle (or Spear Thistle) by a grateful nation, as its national emblem, came about as a large force of Vikings were making one last foray to beat the sleeping Scots, when one barefooted Norseman stepped on a thistle. His cry of pain woke the Scots and they routed the Vikings who never again returned to Scotland. 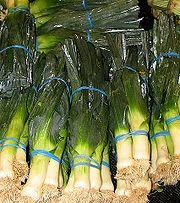 The legend of the leek depends on the story-teller. Wales is now primarily represented by the symbol of the red Welsh Dragon, but other national emblems include the leek and daffodil. The Welsh words for leeks (cenrin) and daffodils (cennin Pedr = (St) Peter’s Leeks) are, as you can see, closely related and it is likely that one of the symbols came to be used due to a misunderstanding for the other, though which came first is lost in the mists of time.

According to legend St David had lived on bread and leeks when he had been a monk in Wales and he gave this unappetising fare to the Christian Celts before their battle, which may also have taken place in a leek field, against the heathen Saxons. The Welsh Celts won the day and adopted the leek as their emblem. All three emblems are known in the UK as representing Wales; however the Welsh Dragon prevails for patriotic regalia.

As a young boy St Patrick had been taken from his home in England as a slave to Ireland, but after his escape home he became a fervent believer in the new faith, and wanted to convert the Druids (a priestly and learned class) and their king to Christianity so returning to Ireland. 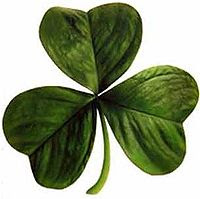 St Patrick was caught lighting a forbidden fire and brought before the King, but was given permission to speak before being sentenced, when Patrick told the King the story of the Trinity. But the ruler needed a sign, at this Patrick bent down and picked up a shamrock with the words ‘Look, three leaves in one leaf’. The King, saved Patrick, and adopted the new faith with the shamrock becoming the basis of the Celtic Cross and the national emblem of Ireland.

The Rose of England made its first royal symbolic appearance in England when Edward I adopted the flower as his badge, and we know that the Crusaders carved rose emblems on the buildings in the Holy Land (industrious lot weren’t they .. can’t see us doing that today somehow?!).

In 1455 the series of civil wars now known as the Wars of the Roses broke out – so-called because the House of York adopted the White Rose as its emblem and the House of Lancaster bore the Red Rose. The struggle finally ended in 1485 with Henry Tudor the victor at the Battle of Bosworth.

Now was the time for reconciliation and a symbol of the re-unified nation was needed – Henry VII combined his Lancastrian Red Rose and the White Rose of his bride, Elizabeth of York, and the resulting combination was the Tudor Rose. 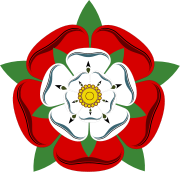 From that day the Tudor Rose, sometimes called the Union Rose, is the traditional floral heraldic emblem of England, taking its name and origins from the Tudor dynasty.

I have to say I am m not sure I would have liked to walk through Scotland barefoot, or fight in a field of leeks, let alone carve roses out of stone in the high temperatures of the Holy Land, or for that matter probably just live in the cold and damp of Ireland! Fortunately I live today .. but I love my history and traditional past!

To tie three of them together, the Welsh probably being included with the English, as their national heritage only really came to the fore with devolution that is presently occurring in the UK, is Montreal’s flag, which is based on the city’s coat of arms.

The Cross of St George, now the national flag of England, which forms the background, is quartered by the four floral emblems representing the four main European ethnic groups that initially settled the city: the fleur-de-lys of France (the Royal House of Bourbon), the Lancastrian Rose representing England, the Shamrock representing Ireland and finally the Thistle representing Scotland.

Dear Mr Postman thank you for delivering this new letter - I know my mother will laugh at the Norseman stepping on the prickly thistle and I am sure the little snippets of emblemetic history will amuse her .. I won't be here tomorrow, as I am off to a funeral of a cousin's mother-in-law ..
Hilary Melton-Butcher
Positive Letters
Posted by Hilary Melton-Butcher at 12:36

I LOVE shamrocks and I loved learning more about them here. Thank you!

Hilary, thank you for the understanding of how these plants came into play in the history of the UK. What a lovely post. We will miss your post tomorrow. Have a safe journey. Sorry for the loss.
Dan and Deanna "Marketing Unscrambled"

This was a fascinating post, and I hung onto every word. I like flowers and was thrilled to learn about the Viking stepping on a thistle, and St Patrick finding a shamrock to represent the Trinity. Lovely read, keep up your great work!

Your story about the vikings invading Scotland and a viking stepping on Scottish Thistle was really quite fascintating. It is difficult to tell if legends like that are factual but it is interesting none the less.

Now I thought that the War of the Roses was a war fought over power...the throne of England.

Very interesting things here. Where did you learn so much of so many things. You are amazing.
Thanks for sharing.
Giovanna Garcia
Imperfect Action is better than No Action

Hi Dani .. thanks for visiting .. Shamrocks have always attracted us - haven't they? Does it show your roots .. the love of Irish shamrocks?

Hi Deanna and Dan .. glad you like the story of our 4 plants .. and yes I'm safely back .. it was sad - but Connie had had a good life - 95 full years! So it was nice to catch up with friends and family and say goodbye.

Hi Pete .. yes the war of the flowers! Well the power of nature?! Legend probably has some truth - but lore will abound ..

Glad you enjoyed it though -
Hilary Melton-Butcher
Positive Letters

Hi Daphne .. thanks so much for visiting .. and I'm glad you like the four stories of our national emblems - thank you so much for your continued support .. appreciated.

The Viking seems to have hit the spot .. for interest!

Hi Gio .. very glad to hear you like the info .. these ideas are just 'there' part of my upbringing I suppose! Eclectic to say the least .. but the short succinct versions provide stimulation and topics of interest for my mother - which, as a stroke victim, are not too complicated for her to take in and comment on.

Thanks for being here - always appreciated -
Hilary Melton-Butcher
Positive Letters

Thanks for sharing! I didn't know these flowers have wonderful stories behind them :-)

Hi Jocelyn - thanks for visiting, lovely to see you here. Just glad you enjoyed the stories of these emblem plants ..these historical and legends interlinking our earth are so interesting and informative. we all have histories ..

Some people like to forget the savage side of their viking ancestry. I resonate with the resilient nature and resourcefulness of that civilisation. They brought lingonberry jam to Newfoundland (Canada) which is often called partidgeberry jam locally. Still tastes fabulous on swedish pancakes! Love the viking ships too!

Hi Liara .. in those days everyone was a savage, it was the only way to survive and conquer new lands .. they were certainly resilient and resourceful in those distant days.

Yes the jammy longships would make a good story?!

What a lovely description for jam - partridge berry jam ..

Thanks for the resource info!!
Hilary Melton-Butcher
Positive Letters

Loved the stories and history behind each of the flowers. Agree with everyone else....Fascinating post! I especially like the story about thistles.

Thank you for sharing a piece of your history.

Hi Roxanne and Hugo ..thanks for visiting and for enjoying the stories behind the flowers .. especially the prickly thistles ..

Glad you enjoyed the history!