Which is the fastest, highest ... and who is the oldest man in the world? 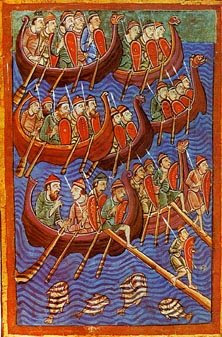 Which is the fastest game bird in Europe .. the koshin golden plover or the grouse? Sir Hugh Beaver, the Managing Director of Guinness Brewery, posed this question in 1951 during a shooting party in North Slob (the large mud flat on the north shore of the River Slaney), County Wexford, Ireland.

No wonder the English have such a rich language .. I never knew where the word ‘slob’ came from – funnily enough as children, we all used to call each other ‘slob’ and still do sometimes!! Back to slob! – the estuary of the River Slaney, in the Viking era (approx 780 – 1030 AD), was an inlet of mudflats, the Vikings naming the city Wexford from their Norse words “Waes Fjord” for mud flat, the Slobs being named from the Irish word ‘slab’ meaning mud.

This question of the fastest bird became the subject for discussion over dinner, with the realisation that the question simply could not be answered, along with lots of others over which arguments would ensue and honour could never be satisfied as there was no definitive reference book to check out the facts.

Beaver’s idea of such a book became reality when twins Norris and Ross McWhirter, who had been running a fact-finding agency, were commissioned to compile what would become The Guinness Book of Records in 1954. In 1955 it had become a British bestseller and by Christmas that year had sold 70,000 copies. 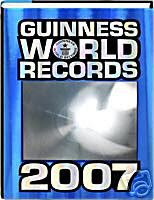 The American edition was launched in 1956, when it was realised that the book supplying answers to numerous questions might prove popular. The initial publication became a runaway success being published annually, containing an internationally recognised collection of world records, both human achievements and the extremes of the natural world, while the book itself holds a world record, as the best-selling copyrighted series of all time.

Henry Allingham, who lived in Eastbourne where I now live, and continues to live in Sussex is an amazing man, who now features in the Guinness Book of Records, as the world’s oldest man born in 1896, having just celebrated his birthday on June 6 he is now 113 years old. The previous incumbent, Tomoji Tanabe, died in his sleep at his home in Japan, also at the age of 113. 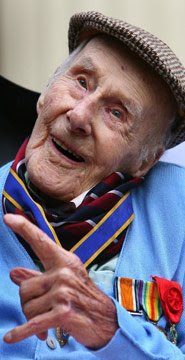 Mr Allingham is twenty five years older than my mother, 88, which is considered a whole generation, and which fact does make me consider all that he has lived through. His terminally ill mother persuaded him not to sign up as soon as war broke out in 1914, when he would have been would have been 18, but immediately she died in 1915 he promptly enlisted.

He has, as you might expect, got many ‘lasts’ to his name – however it is his spryness that the nation sees – he lived on his own until he was 110, and now lives in St Dunstan’s Care Home for the Blind; between his 110th and 111th birthdays he attended 60 public events, and still continues to participate in commemorative functions and as an honoured guest at various events. 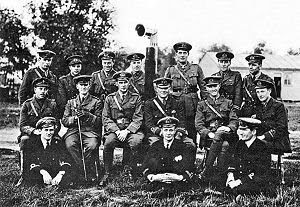 Personnel of No 1 Squadron RNAS in late 1914

He has been an active participant in telling the World War I Veterans’ stories so that future generations will not forget; he is visited by RAF trainee technicians, who despite their almost 90 years age difference, display the bond of respect that they have for each other. 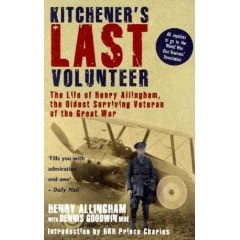 Despite his failing eyesight he is reportedly in good health, with visitors remarking on his memory and voice – this we can hear when he is interviewed. Up until he was 110 he was able to walk, but nowadays he sits in his wheel chair but can recall events from over 100 years ago – so no failing memory there, despite being physically fairly frail!

Kitchener's Last Volunteer: The Life of Henry Allingham, the Oldest Surviving Veteran of the Great War (available from Amazon)

I just thought I would mention a very! few milestones that have occurred in the past 113 years and let you have a few of the quotes that Mr Allingham is said to have made regarding his longevity and life in general.

As a boy of 7 and 8 he remembers watching WG Grace play cricket, and when he was 6 he recalls the City Imperial Volunteers return from the Second Boer War in 1902. His second job at a Car Body Makers, was when cars were put together using separate component parts – coach building being one of them (I know my grandfather used this method for purchasing a car in the early 1920s, by selecting the coach work separately).

His longest stint of employment in 1934 was with the Ford Motor Company, which had only just opened its first plant in England in 1931, eventually retiring in 1960. Although not formally qualified he has been recognised by the Institute of Mechanical Engineers who presented him with a Chartered Engineer award on 19 December 2008.

Henry had the following to say about the award: "Since entering the engineering profession I always hoped to become a chartered engineer, but when I was younger we just couldn’t afford it. It’s something I never thought would happen for me, so to receive this honorary certificate from IMechE is a lifetime’s goal finally realised. I am very grateful to the Institution for presenting me with the award.” It’s never too late!

1896 Ford Quadricycle - courtesy Ford Archives
Mr Allingham credits "cigarettes, whisky and wild, wild women — and a good sense of humour" for his longevity!
He was quoted as saying "They (the veterans) have given all they have got for the country ... I owe them ... we all owe them."

On his 111th birthday asked how it felt, Allingham replied, "I'm pleased to be seeing another tomorrow. It's just the same as it was as at any age, it's no different. I'm happy to be alive and I'm looking forward to the celebrations. I never imagined I'd get to 111.”

When asked the secret of his long life, Allingham said: "I don't know, but I would say be as good as you possibly can."

The following quote when the distinction for being the oldest man in the world to be alive was sinking in, was made when a friend said “Henry thinks he has got to a time where he is more than ready to go” – “but as his mother used to say ‘Wait to be asked, Henry, wait to be asked’”.

A special man with a relevancy to us today with stories to tell through his books, and to his many family members – most of whom now live the United States – where he even has one great-great-great-grandchild!!

He has been through and seen so much during his lifetime including the first publication of The Guinness Book of World Records when he was 58, and now 55 years later he is in it himself, as a living legend.

Dear Mr Postman – I know my mother will be fascinated by this .. and to think that he has lived all these years, she has always wanted to live on to be 100 - it’s sad that her quality of life is not as good as Mr Allingham’s .. but she will enjoy the story and will be stimulated to remember things occurring in her lifetime.

Oh and same here with calling each other the slob name. Ha!

Your discovery of where the word slob originated was very informative! When we were children we called each other slobs also.

The story about Mr Allingham was really quite fascinating! It would be interesting to see thru his eyes.....the changes that have happened in the world during his time.

Yes - Mr Allingham is really still quite lucid; I think he probably was in sheltered housing first .. before the move to St Dunstan's

Thanks for the comment, just prefer Tess I think!
All the best and I hope this week goes peacefully, bringing lots of happy memories for you all - without too much sadness.

Hi Pete .. I can't believe you too?! I was surprised when slob came up as a name for mud flats.

I'm going to get his book for my uncle so we can actually see his world - should be extremely informative on those times. He was quite clever having worked his way up in his engineering world, despite no qualifications. War teaches you to manipulate things and develop ideas - our house was full off lots of bits and bobs - always there to be used, when required.

Thanks for thinking back over 100 years .. an amazing world.

Hilary, that is truly an amazing post. We learn so much from your posts. Thank you for letting us know where slob came from. We use it as well. That word gets around. Thank you Love the photos.
Dan and Deanna "Marketing Unscrambled"

Hi Dan and Deanna .. I can't believe you too use 'slob' .. quite extraordinary! Oddly enough the resource where I'd look for its origins doesn't mention it .. but it must come from this time .. & I see it does .. lazy, slovenly person!

Wow! How incredible to learn about Mr. Allingham!

I thought this was funny! His advice for longevity...."cigarettes, whisky and wild, wild women — and a good sense of humour"

Hi Roxanne and Huge .. thanks for that! Yes - me too .. shows a good sense of character!

Yes - I'm on the way over to meet Victoria .. and have a Happy Friendship Friday .. later, but I'll be there!