What was red, is now blue .. but actually is green? 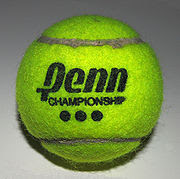 They were white, are now usually yellow – there is no colour code except at the green and purple .. when it’s white .. guessed what’s happening? Yes – you’re right... the start of the British lawn tennis season. 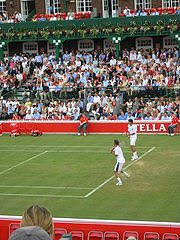 The precursor tournament to the third of the Grand Slams, Wimbledon, is the one being played now at Queen’s Club in the west of London. It used to be a magnificent bright red for the Stella Artois lager brand .. the red and green contrasting superbly; now Aegon insurance have taken over and the bright blue (plain html blue .. I’d hoped to find a fancy name such as the Pantone Yellow used by Selfridges) – well plain blue too contrasts brilliantly with our grey skies .. yes, it’s the outside lawn tennis season with its accompaniment of a gentle heavenly sprinkle! Good for this ‘green and pleasant land’ though, as described by William Blake in his lyric for the hymn “Jerusalem” – my school song, no doubt along with lots of other institutions.

As far as the modern game of tennis is concerned, it seems to have derived firstly from the mid 1800s .. long after Real Tennis had established itself, together with other older or different variants of ball games over the centuries and from across the countries of the known world. However these were mixed and matched and in the 1860s a game started to be played that would evolve in today’s tennis.

Croquet had become popular during the mid 1800s, as it was a game that could be played by all, and there were plenty of croquet clubs springing up with lots of lawn coverage. The game of tennis started to be refined, and four friends founded the first tennis club in Leamington Spa, moving from the croquet lawns they’d been playing on in Birmingham. Croquet spread like wildfire across the Anglophile countries: Australia, New Zealand, North America and South Africa - the game of tennis closely following.

However tennis by the late 1870s had eclipsed croquet as the fashionable game of the day, with many of the newly-created croquet clubs, including the All-England Club at Wimbledon, converting some or all of their lawns into tennis courts. 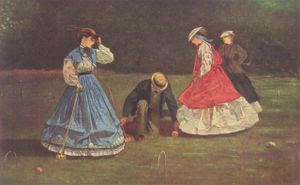 The second part of the modern game of tennis came from the game of Sphairistike – which is Greek meaning “skill at playing at ball” – it was called simply “sticky”. Major Wingfield devised this “sticky” game for the amusement of his guests at a garden party .. having based it on the newer sport of outdoor tennis or real tennis, and apparently taking and using the French vocabulary of real tennis, applying those terms to his new game.
These popular sports developments tie in with the founding of Queen’s Club, as the first multi-purpose sports complex to be built in the world. The club was named after Queen Victoria, who was its first patron, and hosted as many as 25 sporting activities, including lawn tennis, real tennis, ice-skating, baseball (surprisingly!), athletics, football and rugby. As these events grew in their popularity, with as many as 10,000 spectators sometimes present to watch events, new sporting venues were found – ice-skating at Twickenham, rugby at Twickenham, football at Wembley and athletics at White City ... baseball seems to have jumped the pond, once and for all! Having checked I see baseball was being played here in the 1750s – yes, 1750s .. that’s what I said! Another historical story to tell.

Lawn Tennis being played in the States in 1887
Queen’s Club, having been bought out by the members, for £35m, from the Lawn Tennis Association in 2005/6, today restricts itself to balls sports and boasts 28 outdoor lawn tennis courts, ten indoor lawn tennis courts (not quite sure how that works!), 2 Real Tennis courts, 2 Rackets courts, 3 squash courts and a gymnasium. This exclusive Club also offers all the additional hospitality elements, including a museum. 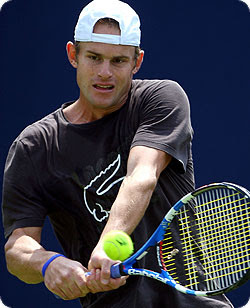 It is a fine setting for what has become since 1969 the established pre Wimbledon Tennis warm up gentlemens’ tournament and features many of the top players – Andy Roddick (USA) and Lleyton Hewitt (Australia) having won 4 tournaments each in this decade, and both are playing here once again.
Next week .. both men and women come to town – yes .. I mean my home town – Eastbourne! So for this week .. we have Queen’s with the green grass, the yellow balls(well actually that's not right .. I gather they're green tennis balls with bad lighting to make them appear slightly yellow! - oh well!), grey skies for now, and coloured outfits – with today’s marketing colour of html blue, whereas last year it was simply red!
Thank you Mr Postman for delivering this letter - my mother loves the tennis season too .. we used to play at home on a grass court when we were growing up .. however my mother played cricket and had wanted me to play too - but in summer we only played tennis. I hope she'll be well enough to watch some of the tennis .. we'll see - it needs to stop raining first!
Hilary Melton-Butcher
Positive Letters
Posted by Hilary Melton-Butcher at 13:33

Wonderful topic here. I have a tennis court at home and NEVER play, but I'm feeling kind of inspired now... Thanks!

If you do - enjoy your game .. good exercise -
All the best Hilary Melton-Butcher
Positive Letters

Wimbelton is just around the corner. Tennis is on the brain. The French Open just finished and after a quick visit home or rest elsewhere, the key players arrive for a British experience.

Hi Liara .. yes - tennis is here .. we don't get it for long - I don't watch for the rest of the year .. so it's a special part of summer along with all the other British institutional events ..

Thanks for visiting & glad you enjoy the tennis as I do ..

Hilary -- I love reading all your wonderfully descriptive detail. I feel like I'm right there.
Carla Mercer
Miracle Life Solutions

Hilary -- I love your wonderfully descriptive details. I feel like I'm right there.

We love tennis, too! Played alot when I was younger and in high school. Your post has definitely inspired us to brush the dust off our rackets. We haven't played in ages!

Hilary, thank you for all the great information on tennis and how it came about. So many different ways their are to play ball. It is amazing how one becomes more popular than another and then changes again. It has been a while since a new one was stated. There are enough to go around. Great Post.
Dan and Deanna "Marketing Unscrambled"

When I was in England, I had a chance to go to see Wimbledon. After reading your post, I now wish I did go.

Thanks for the story :-)
Giovanna Garcia
Imperfect Action is better than No Action

Hi Roxanne and Hugo - thanks for being here - and glad you can feel you'll be able to dust off your tennis racquets .. chasing balls around with the kids will be fun!

Thanks Deanna and Dan .. yes there are plenty of games around, but we're always inventive - aren't we?!

Tennis has had some changes too - the tie break and the professional game being introduced since the '60s ..

Hi Gio .. Wimbledon is different again .. and definitely worth getting a ticket to, at least, visit during the fortnight of the actual championships.

So a new story coming up on Wimbledon .. for me it has such memories over the years ...